Lembit Öpik and the rewriting of history 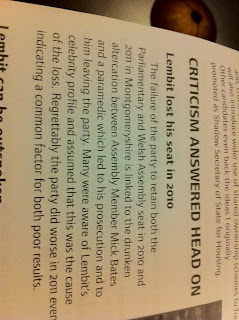 The photograph shows a part of the manifesto being sent out by Lembit Öpik to members in London in pursuit of his campaign to be the Liberal Democrat candidate for Mayor. It contains an interesting view as to why he lost his Montgomeryshire seat. According to Lembit it was entirely due to the incident in which Mick Bates drunkenly assaulted a paramedic in January 2010, which became public two months later.

As somebody who was campaigning actively in Wales during that election I was surprised by this view, as is everybody else I have spoken to since I saw it. What is most disappointing about this leaflet is that throughout the barrage of criticism that Lembit suffered in the years leading up to that election, Mick Bates stood by him as his most loyal ally. When nobody else had a good word to say for Lembit. Mick was defending him. Is this how he repays that loyalty? It does not bode well for his mayoral candidacy where he will be expected to unquestioningly support candidates all over London.

There were a number of reasons why Lembit lost his Parliamentary seat. Chief amongst them was his self-obsessive and flamboyant behaviour and his loss of perspective. His response to the expenses scandal was considered inappropriate and insensitive and then there was this, a free six-day cruise around the Canary Islands, worth around £3,000, in exchange for giving two lectures to the 2,000-odd passengers at a time when Parliament was sitting. That issue was raised a number of times during hustings and in my view was the final straw for some people.

It is possible that the Mick Bates issue influenced some people but it does not account for the eradication of a 7,000 majority. The loss of Montgomeryshire was down to Lembit alone. It is time he took responsibility for it.

Update: from the Western Mail:

Mr Opik later disowned the manifesto paragraph which he says he had not approved.

He said: "Having seen what Peter has seen I think he's justifiably angry. He'd be right to take a dim view of it if I approved that phrase and I haven't... I'd like to apologise to Mick. I personally apologise to Mick because this is unacceptable."

Mr Opik said Mr Bates was "close to being a brother to me" and added: "From now on I won't allow anything to be published without me signing it off in writing."

We all know that you can interpret statistics in many ways but it's grossly unfair to say the 2011 result was worse than the 2010 one.

In theory the 2011 result should have been worse (and IMO it would have been had it not been for the fantastic work of Wyn Williams, Jos Walker et al) as the Conservatives had a local high profile and well known (for the RIGHT reasons) MP to work with and had the momentum from their big win in 2010.

There is never a single reason why you win or lose a campaign. It was long before my time, but I've heard many interesting theories as to why Mont was lost in 1979 some big, some small and some I'm sure exaggerated over time.

Peter you are perfectly correct to say that Lembit lost perspective in the final years of being an MP. Many people say he chose to ignore Montgomeryshire, but having worked for the party up there between 2006 and 2008 and watched with interest post 2008 I can say that is not true. Lembit was genuinely a hard working local MP who loved Montgomeryshire and it's people (something his ex even confirmed: http://www.mirror.co.uk/celebs/latest/2010/05/07/cheeky-girl-sad-at-ex-s-defeat-115875-22241709/ )

Lembit will lose the nomination to be the party's candidate in London like he did the 2008 Presidency, not because there is a better more well suited candidate (that's a debate for another time), but because he's chosen to surround himself by a small group of friends (namely Eric Joyce) who tell him what he wants to hear and do as he says, none of whom are experienced in campaigning, messaging, strategy & direction or communications all of something you need if you want to win. None of these people have the guts to stand up turn the problem around and say, "look we've got a problem here, if we want to win, we need to do this, this and that."

It's sad as he genuinely is a talented politician and communicator and wants the party to do well.

I agree, although what Lembit said about the influence of the press was quite correct!

I find it sickening that he would try and shift the blame for the loss of Montgomeryshire away from himself, he took his eye off the ball (and forgot who he was serving, surprised to read in the article he spent Mon-Fri in W'minster as most MPs are home and dry by Thursday night in my experience).

Lembit, is, sadly, a busted flush, loads of potential never quite fulfilled.

If the Mick Bates affair was the reason why Lembit lost Montgomeryshire then why were the actions of Labour MPs over expenses not fatal to their replacement candidates in Luton South, Scunthorpe etc.

Lembit got Mick Bates to sign his nomination paper for the 2010 election. If he then blames Mick for losing him his seat then Lembit's political judgement must also be seriously called into question.

All very well but I think you're all doing Glyn Davies an injustice.

Everyone agrees that Lembit shot himself in the foot which accounted for a massive defect but Glyn worked so hard and is experienced that we felt we had a better alternative for MP and someone who deserved our previously nailed on Liberal vote.

You do a great dis-service Peter by not mentioning this

I always thought Mick Bates had a good defense against the charges. He suffered a head injury prior to the alleged crime. I don't understand why he did not appeal. cw

You're right Peter, it's long overdue that Lembit reflected in his performance, took responsibility for losing Montgomery and accepted that in that act of cerlessness he threw his political career away.