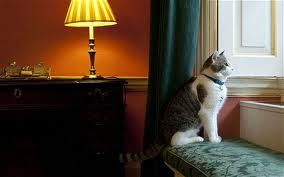 Scrutiny is absolutely vital to ensure good government and woe-betide any member of the ruling elite who is caught sleeping on the job. And yet that is what has happened to the newest occupant of Number Ten Downing Street.

This morning's Independent on Sunday reports that Larry the Cat, who was brought into Downing Street to sort out the rodent problem, is more interested in catnapping than rat-catching:

It is understood that the rescue cat spends most of the day asleep, waking occasionally to startle staff with a sharp claw to the calves. And then there's the fur. David Cameron's Savile Row finest has been covered in it on more than one occasion.

An aroma is also wafting through the corridors of power. Visitors with a keen sense of smell are picking up notes of cat food, despite attempts by staff to mask it with air freshener.

Larry is said to have won the hearts of even the toughest political animals, but some insiders are unimpressed. "He has shown no interest in the many mice in Downing Street," one recent visitor said. "There is a distinct lack of killer instinct."

Welcome to the joys of sharing your home with a cat. The paper says that Larry may not be entirely to blame for his failure to kill:

According to Battersea Dogs and Cats Home, where Larry came from three weeks ago, rehomed cats should not be allowed outside for eight weeks. That has not stopped one or two bids for freedom, notably when the film star and theatre director Kevin Spacey was posing on the steps of No 10 with Mr Cameron, and a civil servant inside was spotted catching Larry before he escaped.

The four-year-old tabby's poor performance is also entirely in keeping with warnings that town cats do not actually make good rat-catchers.

In other words those who drafted the cat to the Cabinet Room should have thought it through before imposing unrealistic expectations on poor Larry. Mind you when Larry does get into gear there will be new shocks in store for those visiting Number Ten.

Cats do like to present their latest kill to their human hosts as presents. Do not be surprised at reports of dismembered rats being left in the Prime Minister's study or under the Cabinet Table. This could be more entertaining than I thought.