My cat and René Kinzett 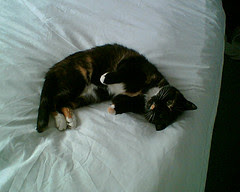 The Conservative leader on Swansea Council has the front page in today's South Wales Evening Post seeking to justify his poor attendance record at Council meetings by claiming that most of them are a waste of time.

René Kinzett only attended 13 per cent of committee meetings since last April. His defence is that a number of them are pointless:

He said: "The member support and development working group is a total waste of time. It does not make any decisions whatsoever. What is the point in attending meetings that have no decision-making powers?

"The constitution working group is another talking shop. Nothing of any use ever comes out of this meeting. A lot of councillors sit around creating a lot of hot air."

He continues: "Much of the time spent in meetings in County Hall is an utter waste of time — pointless pontificating by councillors who know less than my cat about much of what they are considering."

I have illustrated this story with a picture of my cat who is much more photogenic than either René or me. The question is 'does she know more about what is going on in Swansea and on the Council than René Kinzett?' I think that given the amount of time she spends sleeping on top of the Evening Post, that may be very possible.

Comments:
Hey Peter, I know that Mitsa is a friend of Derrick's on Catbook and I think they should exchange notes on their views as to how Swansea Council really ought to be run. As long as it includes the dishing out of plenty of cheesy chicken treats, Derrick will be delighted! Alternatively, why not a human v cat mastermind to pit our knowledge of Swansea Council against our feline counterparts? I would not like to put money on the outcome either way!

You should ask Rene to stand down and let his cat be elected. It'll probably make more of an effect.

If that doesn't work, tell him councillors' pay is linked to the percentage of meetings attended. If he's only getting 10% of his pay, he'll soon change his tune.

I still have no idea why people elect people who have no intention of working hard. It baffles me.

Councillor Rene Kinzett now lives in Streatham, London, with George Galloway MP as his neighbour. How can he know what's going on in his Mayals Ward or Swansea as a whole or the Swansea Council?

Perhaps she has a busy sex life, you never know.

I'm sure most cat owners would find very good use of the EP in the litter tray!

Robert >> "Perhaps she has a busy sex life, you never know."

Hi Peter
A comment on the Eve Post story makes the point (which I had actually overlooked) that the attendance of Councillors across the Parties is not excellent and a list of ruling group (LibDem/Independent) councillors listed.
Also, whilst you say in your comment guide to this blog that you don't take kindly to anonymous contributions...but you seem happy for false allegations about my living arrangements to be posted on your blog...hey, ho.
Best wishes
R

The sad point about this type of issue and the comments made particularly in the local press is that the only loser in long run is local democracy. Most of the councillors that I have known in over 30 years involvement in local government were hardworking and wanted the best for the people they represented. As in all walks of life some were better than others. Many spent hours reading council documents and trying to solve problems for their constituents.Many lost thousands of pounds in pension as they tried to juggle work commitments with council work.Their homes became their surgery base and their partners unpaid secretaries. It would have been far better if Cllr Kinzett instead of making a rather silly comment about his cat and his personal view of the ability of his fellow councillors had been factual. He could have stated that due to circumstances beyond his control he had been forced to work in London but that he was still determined to serve the people of Swansea by attending the most important meetings such as the main Council meeting.

Jeff
I agree with you 100%. I have tried to make these points in Council, in the media and in my leaflets. From the Council I get jeers, from the media I get yawns and in response to my leaflets I get my opponents putting out lies on their leaflets. So what else can I do but try to get the media's attention in this way? At least it MIGHT start a debate about what type of Council we want in Swansea, whether we want a more representative set of Councillors (by age, gender, background, etc) and whether things like the times of meetings can be looked at again to try to make it easier to attract and retain a more diverse body of Councillors.
René

Clearly, the councillor in question has never heard of 'scrutiny' let alone understood what it means.

Kinzett was too busy sending & receiving child abuse pornography to ‘be’ a Councillor. He is due to be sentenced at Snaresbrook Crown Court on Jan 14th 2019. He will then have a small room and 3 meals a day at the Tax Payers expense, a better deal than the homeless people on the streets of Swansea.
Vile man. He will need several pairs of strong underpants while serving his time in the nick ; child sex abuse voyeur AND a Tory!