Mike German stands down as leader 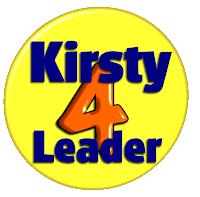 ...and Jenny Randerson announces that she will be standing.

The question is which news will make the headlines tomorrow, that or the fact that Environment Minister, Jane Davidson has decided to call it a day? She will not be contesting Pontypridd at the next Assembly elections.

The contest for the Welsh Liberal Democrat Leadership is now sharply defined. We can either have more of the same or a new start with Kirsty Williams, a fresh young leader who embraces change and who can take the party into the future.

Meanwhile, we still have a fair few constitutional amendments to get through in the Welsh Liberal Democrat Conference tomorrow, as well as a motion on the impact of the Icelandic bank collapse on local Councils and the third sector.

Which set of rule changes went through? Will Eleanor Burnham stand? The Welsh LibDem web-site has not been updated.

Is it too rude to celebrate the news that Jane Davidson will be leaving the Assembly? She has doen terrible, and long-lasting, damage to Wales' higher education sector with her insistence, as Minister for Education, on bigging up Uni Glamorgan (which was in her constituency) and trying to force evrything else that's not part of Glam or Cardiff Univ to merge. She also created the massive funding gap which sees Welsh HEIs serioulsy disadvantaged compared to those in England.

With regard to the LD leadership, surely now is the time for youth to win through - but who gets to vote? Just the 6 |AMs ?

Out of interest, have you already publicly declared for a candidate Peter? Or are you still waiting for each candidate to set out their stall first before you make up your mind?

Personally, i'm hoping Kirsty Williams gets it. I honestly can't see anyone else fitting into the role without looking somewhat "out of place".

I think it will do the party good to have a leadership election and am therefore pleased that Ms Randerson will be standing.

It is to be hoped that whatever the result of the election the whole party in Wales will unite behind the new leader and there will be non of the devivness that there currently appears to be within the assembly group.

I believe that Ms Williams represents the party's best chance for the future of the party but have some concerns that some of the'old guard' will do whatever it takes to fraustrate her if she is successful.

I hope i am wrong but it seems that some put their own agenda before the good of the party.

"My campaign will be all about change. Change of ambition," said Ms Randerson.

"We deserve to be in government. We have ideas but we need to get there and that involves changing our party and the way it views itself."

Doe this mean that the Lib Dems will be outlining your long term wishes for future (present) coalitions and if so could this be a difficult subject for Kirsty after she helped scupper the negotiations in 2007?

I find it difficult to see how Jenny can represent change when she is so close to Mike German. She represeents continuity not change. Kirsty is the next generation. A non-Cardiff based politician who can straddle urban and rural Wales by virtue of her background. Jenny does not even ask rural questions in the Assembly. Kirsty has already said that she is open minded in terms of future coalitions. She is wants to take the Welsh Liberal Democrats into government. The key criteria is that the deal is deliverable. Neither she or I thought the Rainbow Coalition was and I think that the fate of One Wales is beginning to support that view.

The rural question is an interesting one. If your party is to gain seats then the key targets are in Newport and Swansea. What has worked in Cardiff is surely the example that should be followed.

Alternatively if you are worried about keeping the mid wales rural constituencies then kirsty is a better choice. It seems to depend on whether you want to look for more or defend what you have.

This discussion is more about who will succeed Mike German. That's for you Liberal Democrats. My preference as a member of the public and as a voter is all Wales Kirsty Williams before Cardiff's Jenny Randerson. As an outsider I'm more interested in the most welcome news that Minister Jane Davidson is going. The sooner the better. Not only did she damage Education, she went on to declare her intent to utterly destroy Welsh Landscape with Wind Turbines. OK most people couldn't care less about that, but they will care when the Energy Policies of Labour in Westminster and Plaid / Labour in Cardiff cause costly black outs. Can I ask - will she like ex Westminster Minister Brian Wilson get Directorships in Wind Power Companies? I bet she will.

I agree entirely with your last point Peter.

I have no beef with Jenny Randerson but it is inconcievable that someone who has been Mike German's closest ally over the past number of years and who undoubtedly would turn to him for advice if elected can deliver the change needed if the Welsh Liberal Democrats are going to widen their appeal to the voting public.

For that if no other reason I think Kirsty is the way forward.

Twm, my point is that Kirsty comes from Llanelli, cut her teeth campaigning in urban South Wales and has such a big majority because of the support she attracts in the former mining areas of the Swansea Valley. She can appeal across urban and rural areas. It is not a question of being worried about seats but of gaining ground under Kirsty's leadership. That is why Kirsty has such strong support in Newport and Swansea as well as the support of some Cardiff Liberal Democrat Councillors.

I think you can make this into too much of a Cardiff v. the rest of Wales debate, and I'd hope that Lib Dems, of all people, would be bigger than that.

We need to look at the personalities, and what they represent. Jenny has cabinet experience (from the Lib-Lab adminstration in the Bay), and is closer to Mike. Kirsty is less establishment therefore, and has shown herself keener to scrutinise what we'd have to give in order to get some AMs into ministerial limos.

For what it's worth, I believe that the election of Jenny would suggest continuing with past ways (which failed to see even one seat gained in the Assembly) and as such Kirsty would represent the best opportunity to break with that cosy past and move forward. Like you, I can't see how Jenny could bring change, but I'll be interested to hear her case.