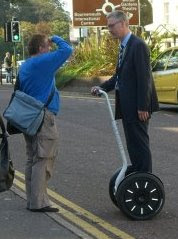 The Times devotes a whole page this morning to the race for the Party Presidency and in particular, the irrepressible Lembit Öpik. According to their Chief Political Correspondent, Sam Coates, Nick Clegg’s closest allies have agreed to mount a high-risk “stop Lembit Öpik” campaign to prevent him from being elected to the Party Presidency this autumn:

A succession of senior figures around Mr Clegg, including Vince Cable, Danny Alexander and Chris Huhne, plan to come out after the conference in support of Mr Öpik’s main opponent, Baroness Scott of Needham Market, former leader of Suffolk County Council. Privately they say that they are determined to stop Mr Öpik.

Ed Davey, one of the masterminds of Mr Clegg’s leadership campaign, will help to run her campaign. There is already bitter briefing against Mr Öpik. One senior Lib Dem asked: “Do we want a joker as the party president? The message is no.”

Another said: “We don’t want him as president. He shouldn’t even have been given a frontbench role.”

A senior figure criticised Mr Öpik for not speaking in a conference debate on housing yesterday despite his brief as housing spokesman.

Although I am staying strictly neutral in this contest for the time being I cannot think of anything more likely to make armchair activists want to vote for the Montgomeryshire MP.

Further down the page Ann Treneman complains that she is being stalked by Lembit on his Segway. Frankly, given the quality of her previous contributions to the journalistic art whilst situated here, it is the least she deserves.

Comments:
For the record, may I say that I am not anti-Lembit, I am pro-Ros.

"Although I am staying strictly neutral in this contest for the time being I cannot think of anything more likely to make armchair activists want to vote for the Montgomeryshire MP."

That's where you're wrong I'm afraid. I live in Montgomeryshire, and although there may be a little support for Lembit, the majority think he's a twit and want to see the back of him. He has quite simply become a joke and a laughing stock, and no-one takes him seriously.

The Segway nonsense has probably lost him further support - why can't he ride a bike if he really cares about the environment?

The LibDems should think very carefully about whether he remains as our MP, because if he does, come the next general election, it will be Glyn Davies as our MP. Incidentally, I have never supported the Tories - but next time I will as Glyn has dignity and the respect of Montgomeryshire people - and is a local man.

What - no caption competition on this one?

LO: Do you know where the patent office is?

No doubt Ms Treneman will feel far more at home at the Consevative Conference. She's got the right level of patter for it.