The Welsh MP and the pop star 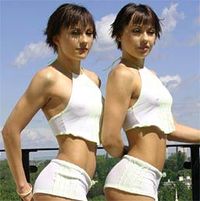 Rumours abound of two newspaper exclusives tomorrow that may have some repercussions on Welsh politics. It seems that Lembit Őpik and Sian Lloyd have finally called it a day and that Sian will be spilling the beans to the Mail on Sunday.

Meanwhile, I have been told that the News of the World will contain details of an alleged relationship between a certain MP and one of the Cheeky Girls.

What a dull life I live!

Update: Sure enough the Mail on Sunday article includes the claim by Sian Lloyd that Lembit had been cheating on her with Cheeky Girl, Gabriela Irimia.

Comments:
They clearly get around
http://www.bromleylibdems.org.uk/photos/24.html

Interesting times we live in.

Looks like the only "smoking gun" here was Lembit's.....

Opik traded in a Rolls Royce for a Trabant.

Gratuitous picture of young females there Peter, but then again, unlike Lib Dem policies in towns as opposed to the countryside, at least they do match!

Nice try. You will find our Assembly manifesto is proofed against such inconsistencies. Coul Lembit be the link between the two there as well?