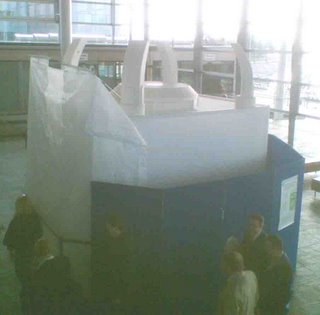 One for the Dr. Who fans. Actually this is not a very good photograph. It is the best I could do with a camera phone in bright sunlight.

The contraption shielded by sheets and information boards is the centrepiece of the Dr. Who filming currently going on in the Senedd. The building is standing in for some sort of futuristic house but that is all I know of the storyline.

I popped over there after all my meetings on Tuesday night and the place was a hive of activity. The building was brightly lit up, with white panels on the big front windows. A group of actors were sitting around a table in dinner jackets chatting, whilst all the extras and techicians were occupying the rest of the third floor cafe. An illuminated large white balloon was floating just below the ceiling. I did not see anybody I recognised and there was no filming activity going on whilst I was there. I believe that they will be there until the end of this week.